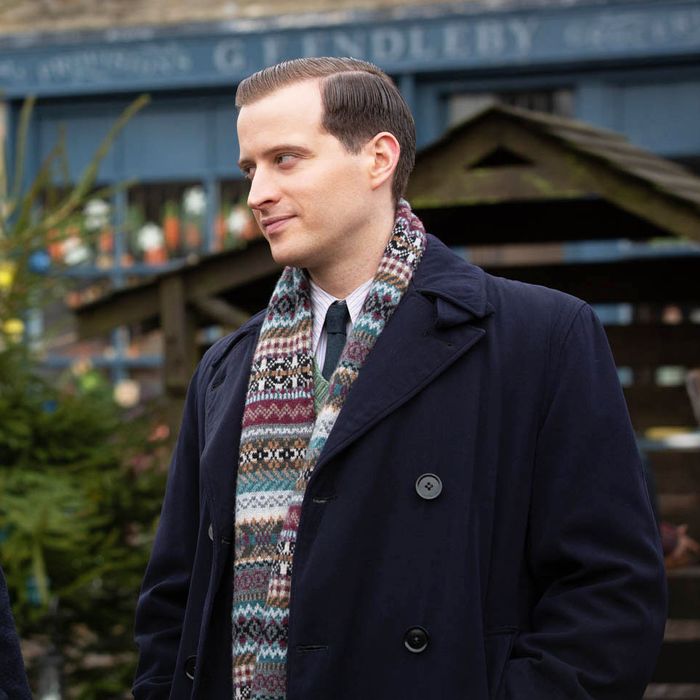 As I realized this season was coming to an end, I dove down a rabbit hole of All Creatures Great and Small behind-the-scenes vids on YouTube. I gasped during the set-tour video and then realized how invested I’d become in this peaceful little show in only seven episodes. The excitement with which people take photos on the Friends couch is how I would feel if allowed to visit the parlor, the kitchen, or even the hallway of the All Creatures set. Do you remember when all these news outlets were reporting that people who were inordinately invested in Avatar were depressed because Pandora wasn’t real? I finally related to that, only instead of being sad about the absence of glowing flowers and majestic bird dragon things (I don’t really remember Avatar), it’s cows and cobblestones. I mean, I know both of those things are real, but. You get it.

This “final” episode of the season is actually a Christmas special, originally aired in the U.K. last December, a couple months after episode six aired on Channel 5. Maybe that helps explain why, for a show that specializes in quaintness and charm, it feels strangely off the mark here; this was my least favorite episode of the season. But that’s like saying it’s my least favorite puppy. It’s still very charming and it’s not bad. It’s just not quite as good as all the others. The core characters work best when they’re all playing off each other, and instead “The Night Before Christmas” isolates everyone and puts James in a dark house with Indecisive Helen.

But before that! It’s Christmas Eve and the veterinary practice is hosting a party. Helen and Hugh are getting married the next day, and there’s a pregnant border collie who you just know is going to have some sort of crisis later. Tristan’s exam results arrive but remain unopened, and Mrs. Hall has misplaced optimism that her terrible son who doesn’t deserve her will come to the party.

Oh, and there’s a sick donkey. A sick donkey who was clearly eating mistletoe, Tristan, you were literally standing right next to it while it was doing it. I could not handle the “what made the donkey sick” plotline when Tristan stood there next to the donkey and the mistletoe and said “I will buy all this mistletoe” and then later is like, well, what’s wrong with the donkey? My notes literally say “Mistletoe is poisonous; don’t put the DONKEY by it!” And if your answer is that he knew but he wanted tiny David to tell him, then he prolonged that donkey’s suffering, and I am mad at him for that instead.

As I mentioned, everyone gets split up here. Tristan is trying to get Quiet David to admit the donkey ate mistletoe, which takes a very, very long time. Mrs. Hall keeps doing that sad, looking-up-expectantly thing every time someone arrives at the party, and then it’s never Edward. Siegfried is Father Christmas and is inexplicably set on “courting” (ew) Dorothy, despite the fact that they’ve barely interacted. James is stuck up the hill with Helen as he delivers the Border collie’s puppies, and then the first non-white person we’ve seen on the show (ugh) is used as a device (ugh again) to get them together. Okay. So much time this episode is devoted to James and Helen, and I get that it’s a big part of James Herriot’s life, etc., but these two continue to have the chemistry of a porcupine and a basketball.

Speaking of. I am a grown-ass woman with a wife and a career and two cats I have an unhealthy obsession with, but when Siegfried kissed Dorothy, I lost my damn mind. All I can tell myself is that the show is playing the long game here. While with Dorothy, I presume that Siegfried will keep talking about Mrs. Hall and then Understanding Dorothy will be all “maybe the person you’re looking for was right under your nose the whole time” etc., etc.

There’s no way the writers can assume we have any sympathy for Dorothy when they also give us Siegfried holding Audrey Hall’s hand in church and then holding up the hymnal for her. For non-Christian-church-going people, holding up the hymnal for the other person is a prime sign of care and affection. “I will bear this heavy burden for you and also make sure it’s angled so you can easily read the words,” it says. It’s also worth noting, by the way, that Real Life Siegfried, a.k.a. Donald Sinclair, had a second wife named Audrey, and they were married for 53 years. Just saying.

Tristan fails his exams and Siegfried lies about it because Christmas. James comes to a literal crossroads when he’s driving away from Helen’s wedding. Like. He’s driving, and he comes to a crossroads, and the fact it is a crossroads makes him think about his choices. I cannot. I love this show so much, but no. I sternly wag my finger at whoever did this.

On the other hand, things I do not wag my finger at in this episode include:
• The Christmas decorations
• Oranges with cloves
• Siegfried carrying a wicker basket for Mrs. Hall
• Tristan’s elf costume (IT HAS GIANT BUTTONS)
• The Father Christmas station in the hallway
• James putting a blanket over Helen, which is peak non-sexual romance
• The fact that the donkey’s name is Bob

But one of the best moments of the episode comes at the very end and is, unsurprisingly, a shot of them all together. It brings in the most heartwarming parts of the show: this found family, cozy chairs, cardigans, and a fireplace. While they listen to the radio. All Creatures let us briefly slip into an uncomplicated life, and I hope we can get back there soon.

• Cardigans. Lots of cardigans.
• Build a tiny stone fence in your apartment, as a treat.
• Befriend a massive bull whom you must later send to his doom.
• Judge a pet show in your home using stuffed animals.

Keep up with all the drama of your favorite shows!

By submitting your email, you agree to our Terms and Privacy Notice and to receive email correspondence from us.