With news of the DiCaprio remake facing backlash, Vinterberg explained the rationale — but the Oscar winner has other things to worry about.

In the aftermath of an Academy Awards show where many people expected a bittersweet, posthumous Oscar to go to Chadwick Boseman, the emotional highlight actually landed with Thomas Vinterberg. When the Danish auteur heretofore best known for his Dogme 95 effort “The Celebration” took the stage for his expected Best International Feature win for “Another Round,” he delivered a tearful salute to his late daughter Ida, who died days into the shoot of the movie.

“The target was one minute. I think I landed somewhere around four,” Vinterberg said the next morning, clutching his Oscar from a hotel room and speaking over Zoom. “It was first and foremost an incredibly proud moment, satisfying, and a huge relief.”

The event was more sparsely attended than most Oscar ceremonies, but Vinterberg said he still experienced the weird collision of worlds unique to that event: He was backstage getting his Oscar engraved while listening to Harrison Ford’s rambling introduction to Best Editing, met Laura Dern for the first time, and then embraced fellow Dane Mikkel E.G. Nielsen, who landed the editing prize for “Sound of Metal” moments later. “It was a bit like our country had won a local soccer game or something,” Vinterberg said.

The win also set up a new stage of life for “Another Round,” or at least something like it: The day after the show, news broke that Leonardo DiCaprio’s Appian Way won remake rights to the movie with the actor attached to star as the alcoholic midlife crisis character so memorably portrayed by Mads Mikkelsen in the original. The news wasn’t exactly embraced online, where it registered as a repudiation of Vinterberg’s movie, Mikkelsen’s performance, and the very idea of subtitled films gaining traction with English-language audiences.

Man, Hollywood thinks removing the subtitles is enough of a concept that merits an adaptation.

I wanna pitch Amelie, but sans subtitles. GIVE ME MY MILLIONS OF DOLLARS PLEASE. https://t.co/u6AZHal5Aw

Vinterberg, however, seemed untroubled by that response. He planned to meet with Appian Way on Tuesday but would not remain involved as a writer or director — nor would he speculate about who should fill those roles. “This is all new to me,” he said. “So I’ll discuss this with them, and we’ll see.”

For Vinterberg, the remake concept has come up before: “The Celebration” has been adapted into multiple languages as a stage play over the past two decades, and an English version of his 2012 Mikkelsen-starring drama “The Hunt” opened at London’s Almeida Theatre in 2019. “I’ve seen various interpretations of my work before,” he said. “It’s an interesting artistic thing to see something grow into different versions. Now it’s in the hands of the finest actor you can get and besides being a brilliant actor, he’s made very intelligent choices throughout his career. I feel there’s a lot of integrity in the choices he’s made. I’m full of hope and curiosity about what they’re up to.”

Nevertheless, some have been quick to point out that Mikkelsen himself — who is known in the North America for everything from a Bond villain to Hannibal Lecter — speaks fluent English, so why not just give the role to him? “I’ll leave those kind of decisions to Appian Way and the dialogue I’ll have with them,” Vinterberg said. “I don’t know if Mads would do such a thing. My first thought would be to make a different interpretation. Asking the same actor to do a different interpretation could be a little bit confusing. But I won’t be the main creative force in this. That would have to be up to the people who end up doing it.”

Vinterberg also had insight into the broader conversation around subtitled movies that the Oscars have stirred up in recent years, first by Alfonso Cuarón during his “Roma” campaign and cemented with the “Parasite” domination of Bong Joon Ho. “Of course I enjoy the fact that there are more and more readers of subtitles in the United States,” Vinterberg said. “It informs the possibility of culture to move across borders in different ways. Having said that, it’s still very limited. I don’t think this is only about trying to make this understandable to people who can’t read subtitles. I see this as an artistic project where someone is using the text as a starting point and developing it into something else. It’s a different culture; it’s not only a different language.” 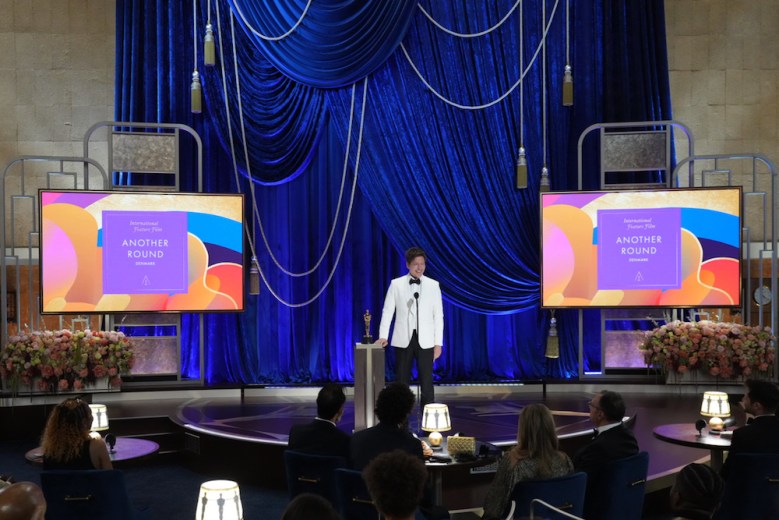 Thomas Vinterberg at the 2021 Oscars

In any case, Vinterberg has his own pivot in the works. Earlier in the month, it was announced that the filmmaker was developing the six-part miniseries “Families Like Ours” for Danish broadcaster TV2. The story is said to involve a flood that overtakes the Danish countryside over the course of a summer and disrupts multiple lives, with only the wealthy few able to move to new places.

Despite the obvious pandemic themes of the plot, Vinterberg said he actually came up with the concept years ago after “The Celebration” wrapped production. “The idea of creating a family of actors and staying with them for a longer time is something I’ve been wanting to do,” he said. “The last day of shooting of ‘The Celebration’ I felt like, dude, I want to keep working with these people. That’s when the feeling of making a TV series appeared to me. I’ll be back and making movies, but this story was basically too long and fit the format of television again.”

But first, there’s that meeting with Appian Way, and whatever comes of its “Another Round” remake. As it happened, Vinterberg said he’d watched “Once Upon a Time in Hollywood” over the past week while quarantining in advance of the ceremony, though not for research about DiCaprio’s acting talent. “I think I know his acting pretty well,” he said. “Of course I knew that this thing with Leonardo DiCaprio’s company was coming up as I watched this movie but I would’ve watched it anyway. I think it’s a masterpiece.”

There’s one key moment from “Another Round” that Mikkelsen owns above all — a climactic boozy dance number set to Scarlet Pleasure’s “What a Life.” It remains to be seen whether DiCaprio will steal those moves. “Oh yeah,” Vinterberg said, thinking it through. “Can he dance? Do we know about that?” Reminded of “The Great Gatsby” and “Wolf of Wall Street” — not to mention a fleeting moment in “Hollywood” itself — Vinterberg smiled. “Of course!” he said. “Mads is fluent in English and he’s a brilliant actor who pulled this off really well, but this will have to be interpreted into something else.”

Sign Up: Stay on top of the latest breaking film and TV news! Sign up for our Email Newsletters here.